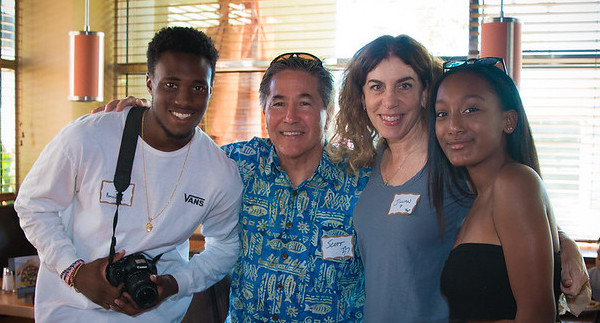 We are so thrilled to be presenting our 6th Annual Lifetime Friendship Award to a husband and wife team, Jillian and Scott with their respective mentees, Betaneya and Ronnie!

Jillian joined Walk With Sally on October 1, 2011 and has been a committed member ever since. Through her own experience with her mother and sister’s cancer journeys, Jillian was able to help her mentee, Betaneya cope with her father’s loss to the same disease when she was just 3 years old. Together, their experiences have helped them communicate with one another which has helped Betaneya cope with the loss of her father. Both saw loved ones consumed by cancer, but both cherish the memories of their loved ones deep in their hearts. Sharing these memories has helped flourish their friendship in unimaginable ways. Whether they are participating in large group settings like the Surf Day Friendship Activity or doing something as small as baking cupcakes one-on-one, they both enjoy their time together! Jillian proudly talks of how her mentee is special and takes great joy in everything they do. Betaneya and Jillian’s friendship is the first that will have lasted the entire eligibility timeframe as they were matched when Betaneya was just 7 years old, and plan to stay friends until graduation and beyond! They truly are an inspiration for all future friendships!

Motivated by his wife’s compassion, Scott joined Walk With Sally in 2014 in hopes of achieving a forever friendship. Ronnie joined the same month and they were a perfect match. At the age of 10, Ronnie lost his father to a heart attack and is now faced with trying to process his Aunt’s (and guardian) battle with cancer. Scott lost both of his parents to cancer and has helped Ronnie cope with the situation. Recently, Scott pushed Ronnie to try out for track at school. While he didn’t make the team right away, with Scott’s continuous motivation, Ronnie tried out once more and made the cut! Scott has helped Ronnie believe in himself and push his boundaries. He has helped build his self confidence and has continuously supported Ronnie through adversity. Scott gave Ronnie his first DSLR camera and continues to encourage Ronnie’s dream of being photographer along with all his other goals. By sharing their emotions and bonding through new experiences, Scott and Ronnie have created an impenetrable bond. It was a perfect match – one that has grown and will continue to grow as Ronnie graduates high school and moves on to his next phase of life with Scott’s support by his side!

Both Scott and Jillian have contributed to the growth of Walk With Sally through their selfless dedication of their time, and most importantly their love. They have played important roles in the lives of their mentees and have gone above and beyond to ensure that they do not have to face this battle alone. The Lifetime Friendship Award is given to those that are strong, yet loving and whom share their compassion with those around them. With that being said, we would like to congratulate them both for being this years Lifetime Friendship Award recipients!