On January 21st, Walk With Sally hosted it’s annual Mentor Appreciation Mixer at Shark’s Cove.  This event was our way of honoring all the wonderful mentors and their commitment to the children and families in our program.  This was also our opportunity to give a special shout out to one mentor that went above and beyond over the past year.  We are so happy to have given the Mentor of the Year Award to Greg Colgan who has been exceptional in his dedication to Max (his mentee) and the organization as a whole.  Thank you Greg for all you do, and thank you BEACH REPORTER’S Michael Hixon for documenting this special moment. 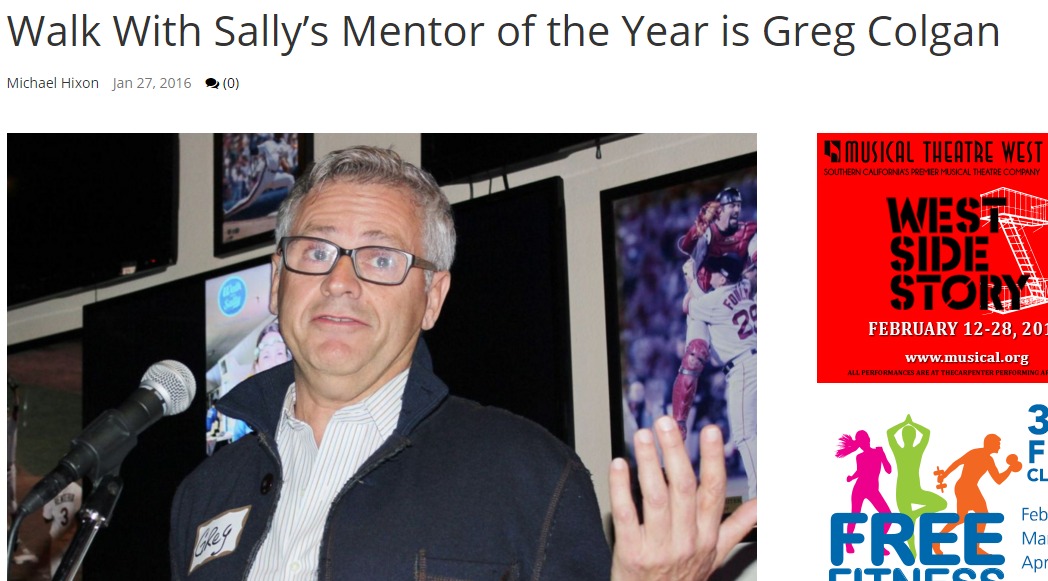 Greg Colgan lost his mother and nephew to cancer so he was looking for a volunteer organization where he could have a one-on-one impact. He attended a Walk With Sally function a few years back and soon realized that it was the nonprofit he wanted to work with.

Through its mentorship program, Walk With Sally provides healing and comfort to children living with or losing a parent, guardian or sibling to cancer. The program requires a year’s commitment from trained volunteer mentors. Cogan began his commitment in January 2015 and was teamed with Max, who lost his mother to cancer. For his work with Max and other volunteer work with the organization, Colgan was presented with the Mentor of the Year award last week.

“It’s so dear to my heart … there are so many people that make this happen,” said Colgan, after being presented the surprise award at Shark’s Cove in Manhattan Beach.

“As a mentor, you get to see that joy when you’re with the child. It’s heartwarming to go through, within a year, a child that might be a little recluse, a little bit sheltered, a little bit quiet, to the point where he’s hugging you and asking dad, ‘When is Greg coming back?’ It’s all about giving them some time, attention and being there for them and showing up. It has a tremendous impact on their life.”

Nick Arquette, who lost his mother to breast cancer when he was a young boy, founded Walk With Sally after he met another youngster whose own mother had died from cancer. He realized he needed to do more and formed the South Bay non-profit that holds the annual White Light White Night fundraiser, which raised more than $200,000 for its programs last year.