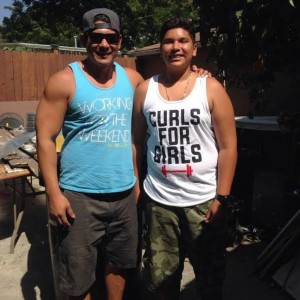 The Walk With Sally program has been changing the lives of people affected by cancer for over 10 years in the Los Angeles area. They are committed to bringing people together to share their story and begin a new journey of healing together. Below is just one story within the program which is told by a mentor, Chris Martinez and how he overcame his father’s death and how he came to be a mentor to Patrick, a young boy dealing with the death of his mother who was diagnosed with cancer a few years ago.

In December 2006 everything in my life seemed to be going very well.  I was 26 years old, had a good job, and was finally starting to really connect to my Dad on a man-to-man kind of level.  Then in early December I got a call from my Dad where he told me doctors diagnosed him with liver cancer and didn’t know how long he would have to live.  Over the next 2 weeks the doctors ran a battery of tests and ultimately discovered that he really had pancreatic cancer and that it had metastasized to his liver and stomach. We saw more doctors and nurses over the course of the next week than I had ever seen in my life.  The oncologist told us that my Dad had 3 months to live but passed away 3 days later.  However, we were able to bring him back to the condo for one last gathering with my family. Then on January 10th at 12:20am he died with my step mom, brother, aunt, uncle, and myself all around him. I will never forget that moment.

The next two years were extremely difficult for me.  As a guy and an athlete, I was always taught to bury my feelings and just deal with pain.   Unfortunately that just caused me to withdraw from the world and become deeply depressed.  On top of that I decided to try and launch a soccer magazine which failed miserably and I lost every penny I had. It was at that point that I decided to start my life over again, seek counseling, and I was finally able to get back to a healthier place.  Through the counseling I learned how to deal with the grief and that I had a choice on whether I let my dad’s life destroy me or use it to do something meaningful.
In the winter of 2011, I learned about Walk With Sally through a friend and I immediately knew that it was something I had to be a part of.  I went to the training and after a few months I was paired up with my mentee, Patrick in June 2012.  I knew very little about him and his family, but was told that Patrick was a very athletic 13-year-old boy and that his mother had been battling breast cancer for about 4 years. That “Match Day” was another event I will never forget. After being paired up with him I immediately fell in love with their family and for the first time in my life I felt a sense of purpose outside of myself.

In November of 2012 I came to pick up Patrick to hang out and as we were leaving his mom said that she had to talk to me in private.  I knew that something was terribly wrong and his mother told me that she was not responding well to the latest round of chemo and that she didn’t know how much time she had left to live. The day after Thanksgiving we sat the kids down and told them that their mother was going to die soon.  Patrick sat there quietly while Samantha (his sister) cried. It was the hardest conversation I ever had to have. Soon after,  he texted me and told me that he was scared.  I called him and let him know that everything was going to be okay and then an hour later he sent me another text that his mother had gone to heaven.  The next day,  he and I went go-kart racing and to talk about his mom dying.  It will be the 3rd anniversary of his mom dying this year and it has not been easy.  I know he misses his mother, but he is by far the strongest person I have ever met.  He’s always in a great mood, always smiling, and I really look forward to every minute that I get to hang out with him.