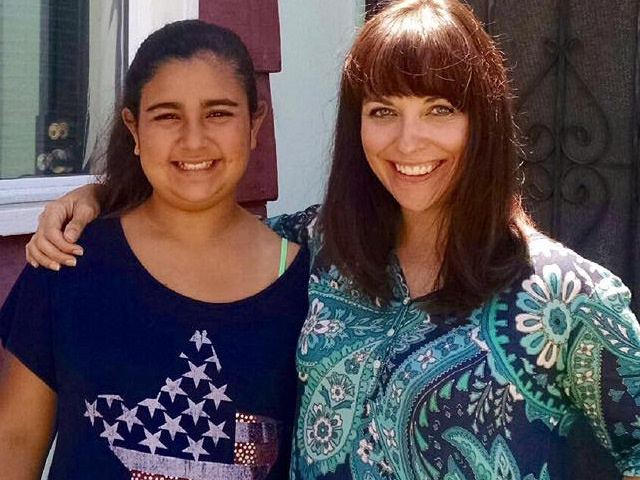 Marley, 12 years old, has been a part of Walk With Sally since June 2015.  She came to us after her school counselor reached out concerned about how her mom’s breast cancer diagnosis had been affecting her.  We soon matched her with Kara, who had a similar story.  Together they have formed a relationship that has helped Marley cope with the struggles that cancer can cause.

She, like many of the children in our program, experienced a variety of feelings – anxiety, guilt, sadness.  Here, Marley describes what it was like for her to learn about her mom’s cancer.  This gives insight into what it’s like for the kids in Walk With Sally to go through this experience:
“Cancer is the worst, right? I was 8 and had no idea what in the world this word meant. My mom explained it to me as: “Mommy is sick, she will get better.” As time passed I decided that I wanted to learn more about my mother’s never ending sickness. The definition that I got was: A disease in which abnormal cells divide uncontrollably and destroy body tissue. My mind was spinning. My body filled with chills. I came home and asked my mother, “Mommy do you have Cancer?” She gave me the most scared and frightened look I had ever seen on anyone. “Umm… why do you ask, honey.” “Because I saw the book you were reading.” She gave me a chuckle, one I would hardly ever hear again. We sat on the couch and she explained everything. I understood. I was always seen in my family as the strong one. This was the one thing that I could not keep myself from crying. I had no idea what was going to happen. What was I going to do?

The end of 5th grade came and so did summer. The day that I dreaded came. My aunt dropped my mom off at the hair salon, I was nervous to see how she would look without hair. It scared me. Her friend dropped her back off at home; my eyes welled up with tears. Her hair was all gone and it was all because of the stupid, stupid disease.

My mother is the strongest person I have ever met. She tells me that she kept fighting for me. She hated taking those pills every single day another, and another. Finally, the day came, the day that made me burst out in tears there is still that little bit of hope.

Have you ever had something that you so badly wanted to get rid of? I have, and it wasn’t even mine. C-A-N-C-E-R. The thing about it is you never fully get rid of it. But of course The end, that was it. Completely over. The cancer. There was no more of it. My mother was completely Cancer FREE. But it still meant that she had a higher chance of it coming back. The only thing I was worrying about was that “cancer free” might only be temporary. Apparently this was not the end of the pain. More pills, surgeries, injections, and blood being drawn. Thinking that it was over was the least of it.